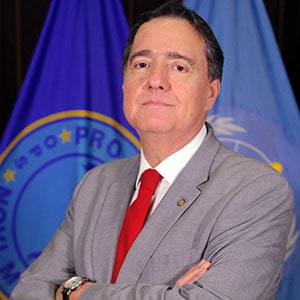 Dr. Jarbas Barbosa da Silva Jr., a national of Brazil, obtained his medical degree from the Federal University of Pernambuco in Recife, Brazil, specialized in public health and epidemiology at the National School of Public Health, Oswaldo Cruz Foundation-FIOCRUZ in Rio de Janeiro, Brazil, and holds a master’s degree in Medical Sciences and a PhD in Public Health from the University of Campinas-UNICAMP in São Paulo, Brazil. He held several technical and managerial positions in the National Health System of Brazil (Sistema Único de Saúde – SUS). In the early-1990s Dr. Barbosa was appointed as the Municipal Health Secretary in Olinda, and subsequently as the State Health Secretary in Pernambuco.

From 1997 to 2003, he served as the Director of the National Center for Epidemiology (CENEPI) in Brasilia, Brazil within the Ministry of Health. In 2003 Dr. Barbosa was appointed as the Secretary (Vice Minister) for Health Surveillance. In the second semester of 2006 he was appointed Deputy Minister (Secretário Executivo).

Dr. Barbosa joined PAHO for the first time in 2007 as the Area Manager, Health Surveillance and Disease Management. He served in this capacity until his return to Brazil in April 2010.

He has participated as a member of the Brazilian delegation in both PAHO and WHO Governing Bodies meetings, was President of PAHO’s Executive Committee (09/2013 to 09/2014), and Vice-Chair of WHO`s Executive Board (05/2014 to 05/2016). Dr. Barbosa was also a member of several international committees and working groups, such as the United Nations Interagency Coordination Group on Antimicrobial Resistance-United Nations (IACG UN) and the Pandemic Influenza Preparedness Framework Advisory Group (PIP Framework AD) where he served as a member and as chair in 2016.

Prior to his appointment as the Assistant Director of the Pan American Health Organization, Dr. Barbosa served as the Director-President of the Brazilian Health Regulatory Agency (ANVISA).